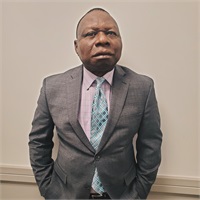 Prior to that, Reggie had over 16 years of banking and financial industry experience working for Bank of America, Citizens bank, Investors bank & trust Company (now State Street Bank) where he was involved in bank management and bank product sales. At Investors Bank & Trust Company, Reggie worked as a senior Portfolio and Fund accountant where he supervised up to six other fund accountants for Net Asset Value (NAV) accuracy and completeness to avoid client loss. Reggie also worked as a mortgage broker at Loan Star Mortgage where he helped low to moderate income earners build up their savings and credit to qualify for home ownership.

Reggie is a highly motivated, focused and effective financial professional who is calm at multitasking in a dynamic and fast paced environment and also a problem solver.

Reggie enjoys traveling overseas and has been to 6 countries including Africa and still counting. Reggie enjoys playing basketball with his over 6ft tall four boys and a girl.

Reggie Ugwuakazi is insurance licensed in the following states: Massachusetts